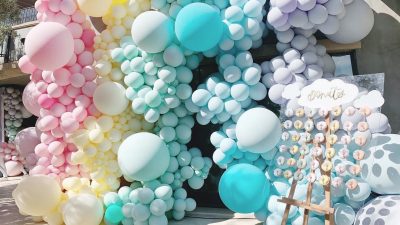 By Jacqui Parr from www.PartyWorldwide.net

Following the news that Khloe Kardashian spent an incredible $8,500 on the balloon display for her daughter’s first birthday, latex balloons have become the latest focus of the Kardashian’s millions of followers.

Pictures of the pastel balloon display at the party, which was held last week, were posted on Khloe’s official Instagram page, which is followed by 98.1 million people.

Created by Wild Child balloon decor company, based in Long Beach, California, millions of followers have ‘liked’ the pictures on both Khloe’s social media and the company’s official pages.

All About Balloons CEO Caity Byrne, who has previously created balloon displays for the White House, estimated that between 1,200 and 2,000 individual balloons would have been used for the backdrop, with a further 300 for the arch that framed the dessert table.